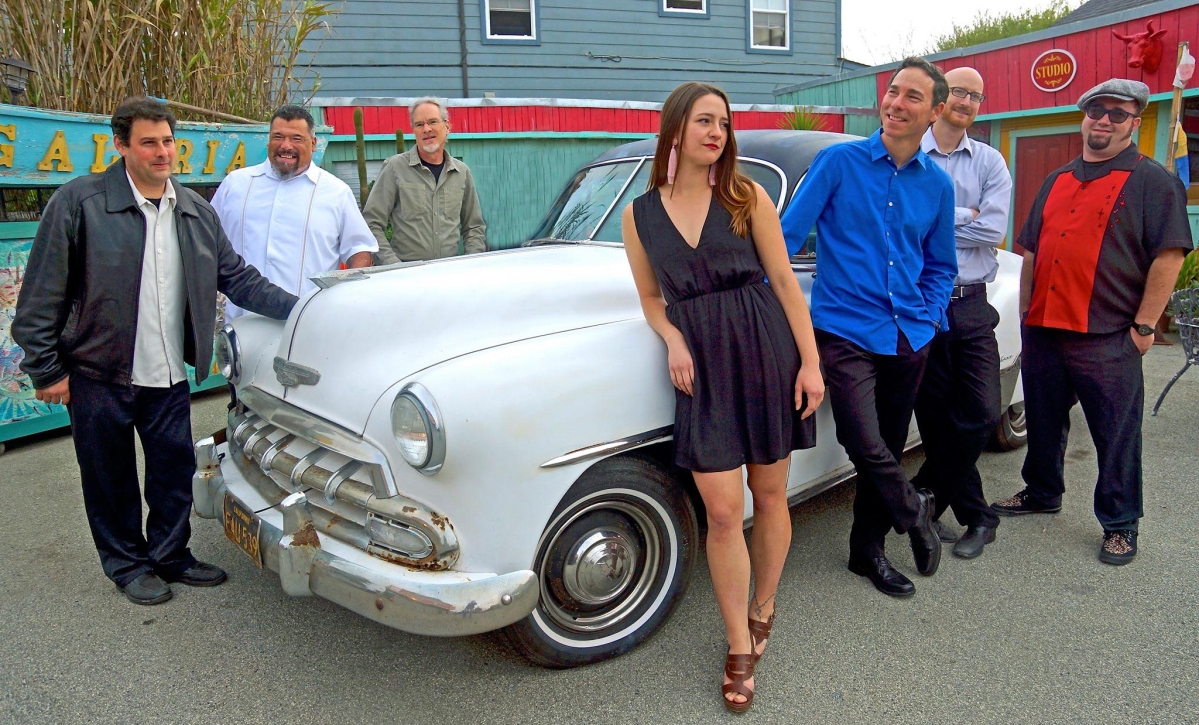 LJC - The Latin Jazz Collective (LJC) is a high energy, seven piece Latin Jazz ensemble that received a standing ovation from a full-house crowd at the 2017 Monterey Jazz Festival. Led by percussionist John Nava, saxophonist Stu Reynolds, and drummer Martin Binder, the band creates a rich and eclectic blend of original compositions and highly acclaimed standard jazz arrangements steeped in authentic Latin rhythms. LJC members have shared the stage, recorded, and performed with the likes of Carlos Santana, Pete Escovedo, The Yellow Jackets,  Malo, Kim Stone (Rippingtons), Wayne Wallace, and many other well-respected artists from around the world. Members of LJC maintain active performance schedules as band leaders, arrangers, and music educators throughout the Central California Coast and Bay Areas.

John Nava began playing music at the age of 6. He comes from a family of musicians, of which he is the 5th generation. At the age of 9, John began playing in the church band under the tutelage of his father and brother. Throughout his high school years, John recorded on percussion and saxophone for numerous local choirs and solo artists. After high school, John joined the Marines and took his soprano sax with him. He was a regular at Washington D.C. area jazz clubs every weekend while stationed at Ft. Lee in Virginia.

Throughout all this, John has continued to teach and mentor any young musician who shows the desire to musically better themselves.

Martin Binder has been playing drum set since he was 9 years old and has been playing professionally since the age of sixteen. His formal studies in music began in high school and continued through junior college where he performed in symphonic band, jazz ensemble, and various small group combos. Martin continued exploring the art of drumming as an undergraduate at San Diego State University, taking two music educational tours to Cuba with his long time mentor Chuck Silverman, where he immersed himself in Afro-Cuban percussion, traditional folkloric rhythms, and contemporary musical styles. His playing exhibits versatility, precision, and passion and brings an unmistakable energy to each performance. He continues to play throughout the Monterey Bay Area with various artists.

Kevin McCollough is a jazz pianist, arranger, and music educator from San Jose CA and holds degrees and teaching credential from San Jose State University. There, Kevin studied under Frank Sumeras and John Schifflett and Wayne Wallace - the later of whom fostered Kevin's interest in Afro-Cuban and Latin Jazz music and tutored him in the art of arranging. Kevin also studied drumset and percussion with Wally Schnalle throughout junior high school and high school. Kevin now plays, writes, arranges, and teaches professionally, and has been involved in several groups playing and writing for a variety of styles of music (though his heart will always belong to Afro-Cuban jazz and Rockabilly music). He credits his family, the aforementioned teachers, and Nancy Farmer for sparking his musical interest in his early years.

Stu Reynolds began studying the clarinet in 1967 and the saxophone in 1969. He was a multi-instrumentalist award winner and featured soloist in Chicago area high school concert and jazz bands and has studied with George Young and John Purcell, trainer to such saxophonists as Michael Brecker and David Sanborn. Playing the tenor, alto and soprano saxes as well as clarinet and bass clarinet, Stu has professional experience in a wide range of styles including classical, jazz, blues, funk, pop, and world beat music, and has performed in concerts and clubs nation-wide. He's opened shows for Carlos Santana, Airto, Los Lobos, the Everly Brothers, the Yellowjackets, Narada Michael Walden, Branford Marsalis, Jimmy Cliff, Dennis Brown, Tanya Maria, Pete Escovido, and many others. He's performed at numerous festivals including the Taste of Chicago, San Francisco's Reggae in the Park, Monterey Jazz Festival, Big Sur Jazz Festival, the San Jose Jazz Festival, and the annual Carnival festivals in Santa Cruz and San Francisco. Stu is Music Studio Instruction Faculty at California State University Monterey Bay and has been teaching private lessons on woodwind instruments for over 25 years, offering insight into technique, tone production and improvisation skills for players from absolute beginners to advanced musicians.

Miranda Aguilar was discovered in an elective music history class while finishing her Bachelor's degree in Business Management at California State University, Monterey Bay in 2015. Although not conventionally trained, Miranda has a keen sensibility of what sounds and feels right. "Singing is the truest version of myself. Seeing people dance and shake off life's responsibilities for a night brings me so much joy. It's my way of spending love." Miranda's musical style is deeply influenced from her parents. Her Chicagoan father, is a true eclectic. Frank Zappa to yodeling to B.B. King, Miranda's father has shown her the freedom music has to offer. Miranda's mother, hailing from Mexico, raised her to celebrate and share her Hispanic roots. She is consistent, confident on stage and not afraid to try something new.

Steve has performed/toured and/or recorded with:

Steve Uccello has appeared as a bassist at many festivals including The Oregon Country Fair, The High Sierra Festival, The Kerville Folk Festival, The Sandpoint Festival, The Millpond Festival, The Island Lake Festival, in British Columbia, The Bumbershoot Festival, and The Folk Life Festival in Seattle. He was also invited to sit in with the Joe Craven Trio at the American River Festival in Coloma, California.

Steve is also a member of the Spanish Nuevo Cancion group The Juan L. Sanchez Ensemble, which has played throughout the U.S. and Canada.

He was a “Featured Guest” at the Mandolin Symposium (2009 and 2010) in Santa Cruz, CA providing bass for student ensembles led by David Grisman and Mike Marshall.

Nick Bianchini is a trumpet player known for his versatile style of trumpet playing. Native born to Santa Cruz, he grew up playing music at Westlake Elementary school and has never stopped since. In high school Nick played in the Santa Cruz Youth Symphony, Kuumbwa Jazz Honor Band, San Francisco Jazz All-Stars and studied at the prestigious Berklee School of Music in Boston. He later went to Los Angeles to study at USC's Thornton School of Music and the Bob Cole Conseratory in Long Beach. During his time in Los Angeles he played professionally with many bands of different musical styles ranging from jazz, classical, vaudeville, to even funk, hip-hop, salsa, and reggae. After finishing school, Nick toured the US and Europe with a number of different bands playing professionally. Recently, Nick has started teaching in Santa Cruz at Branciforte Middle School and Harbor High School. He is now helping inspire the next generation of musicians just as he was once inspired!

Ric Mightybone Feliciano is a Puerto Rican 35 year music industry veteran. Ric is a trombonist, multi-instrumentalist, songwriter and lead singer from Brooklyn, N.Y. who has performed with the likes of Billy Joel, Paul Simon, John Lee Hooker, Jr., Pete Escovedo, Willy Torres, Phil Driscoll, Zucchero, Toto, Foreigner, Jimmy Bosch, and many others. Ric, also known as Mightybone, is also a voting member of the Grammys and the Latin Grammys and has been part of two (2) Grammy nominated albums to which he wrote horn arrangements and played trombone and sang backup. Ric has also taught high school music in Long Island, NY and continues to pass on his musicianship principles to the next generation in private instruction to middle school and high school prospects throughout the Bay Area in California.